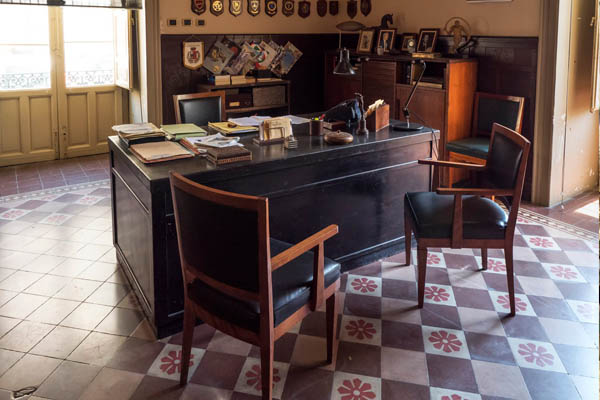 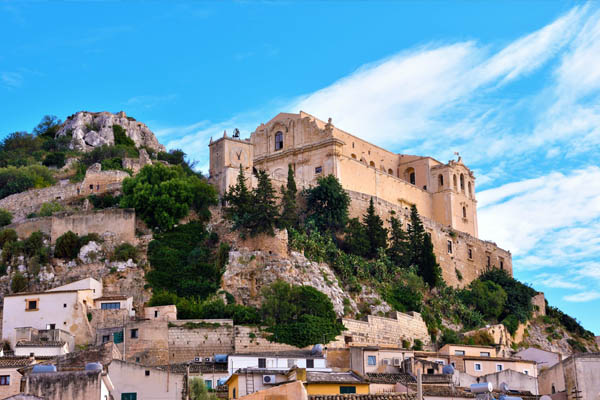 Scicli is a centre of the Hyblean Baroque of Val di Noto, whose historic centre is a UNESCO World Heritage Site.
Scicli extends over a wide plain nestled within three narrow, sunken valleys called Cave, originating from tectonic fractures of very remote times and which have become the bed of torrential watercourses. Its origins are ancient and probably date back to the Sicilian period, about three thousand years ago.
The characteristic conformation of the territory with the presence of quarries and karst caves, has favoured the birth of numerous rock settlements. In addition to the prehistoric one of Grotta Maggiore, we also remember the late Byzantine settlement of the 7th century A.D. located in Castellaccio, and the Byzantine (8th century A.D.) and medieval (10th-11th century A.D.) rock settlement in Chiafura, visible to this day.
After the fall of the Roman Empire, Scicli passed to the Byzantines and suffered, like other towns on the island, the incursions of the Barbarians. The ancient city stood on the hill of San Matteo, where the remains of a castle still stand today, making the ancient settlement difficult to conquer.
Under Arab rule, Scicli experienced a period of remarkable agricultural and commercial development and the Arab historian Edrisi in the first half of the 12th century, exalted the economic prosperity of Scicli.

The definitive liberation of Scicli from the Saracen dominion by Ruggero d’Altavilla and the passage to the Norman dominion date back to the year 1091. To this battle, which took place in the Piana dei Milici is linked the legend of the Madonna delle Milizie (Our Lady of the Militia) every year remembered with a feast that is one of the main folklore attractions of Scicli.
Scicli, with a gradual passage from the hill to the plain, took on its topographical form between the 14th and 16th centuries. The population had increased considerably but first the plague of 1626 and then the terrible earthquake of 1693 led to the decimation of the population and the destruction of much of the town. From that rubble, Scicli was reborn in a late baroque style, and today is characterized by numerous eighteenth-century buildings. In recent decades it has been chosen as a set for films and fiction as “Il commissario Montalbano“. The Municipality of Scicli is, in fiction, the Vigata police station.
Among the most famous buildings deserve a view Palazzo Beneventano, the most famous noble building of Scicli and one of the most interesting in Baroque Sicily, a masterpiece for the sculptural aspect that characterizes its two magnificently decorated facades. Palazzo Fava and Palazzo Spadaro, several important churches including the Church of San Matteo, the Church of San Bartolomeo built in the fifteenth century, which also houses a beautiful wooden nativity scene, the Church of San Giovanni Evangelista and the Church of Santa Maria la Nova.
The surrounding area offers one of the most scenic stretches of coastline in Sicily with a few kilometres of fine golden sand beaches between Donnalucata and Sampieri, some stretches of which are part of nature areas subject to environmental protection including the mouth of the river
Irminio.

QUOTATIONS: The writer Elio Vittorini, in his book the Cities of the World, in 1955 described it like this:
““….. One of the years when we men today were boys or children, late one afternoon in March, there was in Sicily a shepherd who entered with his son and about fifty sheep, plus a dog and a donkey, in the territory of the city of Scicli. This stands at the crossroads of three valleys, with houses on all sides up the cliffs, a large square at the bottom straddling the bed of a river, and ancient ecclesiastical buildings that crown the semicircle of altitudes in several places, such as the Baroque acropolis. It is at the south-eastern end of the island; and those who come from the inside find it suddenly at their feet, festive with piled up roofs, thieving magpies and bells; while those who come from not far from the coast can see it nestling with ten thousand black windows in the middle of the whole height of the mountain, among threads of smoke and here and there the glow of an
open or closed glass, suddenly, against the sun… But what is it? – he asked – Is it Jerusalem? He had blue points of sun in his eyes that prevented him from distinguishing what his father’s face looked like. I heard him answer in every way: “I don’t know what city it is.” He had not said that it could not be the City par excellence: “Jerusalem or anything else called…. How happy they must be in this city!…. ”

This website uses cookies to improve your experience while you navigate through the website. Out of these cookies, the cookies that are categorized as necessary are stored on your browser as they are essential for the working of basic functionalities of the website. We also use third-party cookies that help us analyze and understand how you use this website. These cookies will be stored in your browser only with your consent. You also have the option to opt-out of these cookies. But opting out of some of these cookies may have an effect on your browsing experience.
Necessary Always Enabled
Necessary cookies are absolutely essential for the website to function properly. This category only includes cookies that ensures basic functionalities and security features of the website. These cookies do not store any personal information.
Non-necessary
Any cookies that may not be particularly necessary for the website to function and is used specifically to collect user personal data via analytics, ads, other embedded contents are termed as non-necessary cookies. It is mandatory to procure user consent prior to running these cookies on your website.
SAVE & ACCEPT